Even named after the daughter of the Russian Tzar and Netherlands Queen, the plant origins of China. It is also known in Japan from ancient times.

Both peoples - practical and also treasuring beauty, gave it some poetic names - Emerald tree, Imperial tree... Paulownia was an inherent part of these peoples' life – they used it in furniture manifacturing (the most precious in the Japanese house – Kimono, were stored in boxes, made of paulownian wood), in other furniture making, even in building whole houses. It is known that fire was the most horrible thing that might happen to a home in those times. The precious quality of paulownian wood – burning hard – made this tradition, somewhat preserved even in the present. Another tradition tells that when a girl was borned, the family plant a paulownia in the yard. When the girl grew up and was about to marry, the Paterfamilias truncated the tree. At that time it was really big and the wood was qualitative and in sufficient quantity for making a beautiful chest, where the young bride could keep her precious kimono. Practical and beautiful – it seems paulownia is an exact simbol of the Japanese cultire. Even nowadays there are houses made of paulownian wood in Japan; it is still appreciated by there owners , because it is beautiful, prestigious and of course, safe in case of fire.

Furniture, made of paulownian wood is not rare in China. On the contrary, it is considered that not even before, but also in the present, there is not a Chinese house without a furniture made of this legendary tree. Ceertainly, many other applications of paulownian wood are known. The famous musical instruments, which have been a true mystery for the Europeans, first stepped in the unexplored China and Japan were only one of them . Even the treasures of the Japanese culture – the magicians of singing and dance - geisha, used paulownia to strenghten their charm. Part of the accessories for each of them was thin, specially treated and dried branch of paulownia, which they used to make their eyebrows up, creating an unattainable mysteriousness of the look.

Certainly, we can not omit the fact, that paulownia is a beautiful tree - with its large velvet smooth leaves and bright purple blossoms, it is worthy decoration of every park or garden. In China and Japan this kind of use dates from centuries and in a sense it is a national tradition.

Actually how paulownia is tied to the history and being of these countries, is understood from the fact, that it is a part even of the official political life. The Japanese, who like aesthetics, as the symbols, have chosen paulownia precisely for an emblem in the prime minister's office – this is so called „mon“ - a word, used to indicate and underline one's personal or family identity; its meaning in fact, is close to „coat of arms“ and carrying approximately the same messages. So – the coat of arms in the prime minister's office in Japan is a stylized picture of paulownia. It is hardly to find more definite manner to express the national importance of paulownia for the Japanese people by its presence on the Order of the Rising Sun. It is the first Japanese order, founded in1875, which is serviced to persons with credits to the country. We also cannot omit the presence of paulownia on the Japanese currency – on the coins of 500 yen is it again – the paulownia. 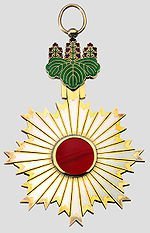 An interesting detail of Japanese lifestyle is hanafuda – special playing cards, depicting different plants. At first Hanafuda were used for different complex games, which the noblemen entertained with. Forbidden for the commonalty, the card games, especially gambling went wide in the Japanese people's life with the opening of Japan to the Western world. Different authors have described these cards and the games played with them have become popular in many countries, including South Korea. Even the cards were called by many different names during different ages and in different countries, there is one thing that remaines unchanged – there is always a picture of paulownia on them. Apropos, it is considered, that even Yakuza (the Japanese mafia) uses them, but this rumor we did not dare to check personally.

While entering Europe, paulownia was given more aliases – The Tree of Adam – in association with the fig tree; according to legend the first man, Adam, used a fig leaf for garments, it's because the Europeans likened the leaves of paulownia to the fig leaves ; and Foxglove – in Great Britain foxglove flower call the digitalis, because the places where digitalis grows, are the favorite hiding places of the foxes, and the blossoms of paulownia are similar to those of digitalis. So each nation called it differently, but also every nationе has found an application of paulownia, according to their needs and traditions. Inspite of the practical trend of the Europeans' thinking, we must not miss that as an ornamental species paulownia is so welcome to the Old Continent, that to manage without it here today is almost inconceivable . There are paulownia trees many European cities, including in Bulgaria.

When you are looking at these pictures you perhaps remember, that you have already seen such leaves in the small park next to your home or that you have admired the bright nice blossoms in the City Garden? Indeed you have probably seen paulownia, but you didn;t know that it is not just another tree species but much more. Tree of Wonders – gathered the past of several cultures, but also Tree of Future, whose qualities we are still about to learn.